The first Sir Henry Merrivale mystery from Golden Age author John Dickson Carr When Dean Halliday becomes convinced that the malevolent ghost of Louis Playge is haunting his family estate in London, he invites Ken Bates and Detective-Inspector Masters along to Plague Court to investigate. Arriving at night, they find his aunt and fiancee preparing to exorcise the spirit in a seance run by psychic Roger Darworth. While Darworth locks himself in a stone house behind Plague Court, the seance proceeds, and at the end he is found gruesomely murdered. But who, or what, could have killed him? All the windows and doors were bolted and locked, and no one could have gotten inside. The only one who can solve the crime in this bizarre and chilling tale is locked-room expert Sir Henry Merrivale. 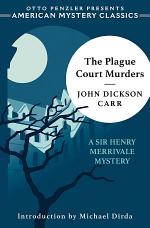