This enhanced eBook transforms The Making of Star Wars: The Empire Strikes Back into an immersive multimedia experience worthy of the original film. It features exclusive content pulled from the Lucasfilm archives by author J. W. Rinzler: • 28 minutes of rare behind-the-scenes video* • 29 minutes of rare audio interviews with the cast and crew • New bonus photos and artwork not found in the print edition In this lavish thirtieth-anniversary tribute to the blockbuster film Star Wars: Episode V The Empire Strikes Back, New York Times bestselling author J. W. Rinzler draws back the curtain to reveal the intense drama and magnificent wizardry behind the hit movie—arguably the fan favorite of the Star Wars Saga. Following his The Making of Star Wars, the author has once again made use of his unlimited access to the Lucasfilm Archives and its hidden treasures of interviews, photos, artwork, and production mementos. The result is a comprehensive behind-the-scenes, up-close-and-personal look at the trials and triumphs, risks and close calls, inspiration, perspiration, and imagination that went into every facet of this cinematic masterpiece. Here’s the inside scoop on: • the evolution of the script, from story conference and treatment to fifth draft, as conceived, written, and rewritten by George Lucas, famed science-fiction author Leigh Brackett, and screenwriter Lawrence Kasdan • the development of new key characters, including roguish hero Lando Calrissian, sinister bounty hunter Boba Fett, and iconic Jedi Master Yoda • the challenges of shooting the epic ice planet battle in the frozen reaches of Norway and of conjuring up convincing creatures and craft—from tauntauns and snowspeeders to Imperial walkers • the construction of a life-sized Millennium Falcon and the swamp planet Dagobah inside a specially built soundstage in Elstree Studios • the technique behind master Muppeteer Frank Oz’s breathing life into the breakthrough character Yoda • the creation of the new, improved Industrial Light & Magic visual effects facility and the founding of the now-legendary Skywalker Ranch In addition, of course, are rare on-the-scene interviews with all the major players: actors Mark Hamill, Harrison Ford, Carrie Fisher, Billy Dee Williams, Anthony Daniels, Peter Mayhew, and David Prowse; director Irvin Kershner; producer Gary Kurtz; effects specialists Richard Edlund, Dennis Muren, Ken Ralston, and Phil Tippett; composer John Williams; and many others. Punctuating the epic account is a bounty of drawings, storyboards, and paintings by Ralph McQuarrie, Joe Johnston, and Ivor Beddoes, along with classic and rare production photos. An added bonus is a Foreword by acclaimed director Ridley Scott. The Making of Star Wars: The Empire Strikes Back is a fittingly glorious celebration of an undisputed space-fantasy movie milestone. Search your feelings, you know it to be true. *Video may not play on all readers. Please check your user manual for details.

The Making of Star Wars: The Empire Strikes Back (Enhanced Edition)

The Making of The Empire Strikes Back

Authors: J. W. Rinzler
Categories: Empire strikes back (Motion picture)
An exclusive behind-the-scenes look at the making of arguably the greatest and most cherished of all the Star Wars films, the most important motion picture sequel of all-time, and a movie that changed pop culture forever: Star Wars: Episode V - The Empire Strikes Back.

The Making of Star Wars

Once Upon a Galaxy

Authors: Alan Arnold
Categories: Fiction
A diary of the production of the Star Wars sequel includes interviews with the principal actors, the producer, director, special effects experts, and the series creator, George Lucas 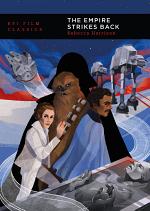 The Empire Strikes Back

Authors: Rebecca Harrison
Categories: Performing Arts
The Empire Strikes Back (1980), the second film in the original Star Wars trilogy, is often cited as the 'best' and most popular Star Wars movie. In her compelling study, Rebecca Harrison draws on previously unpublished archival research to reveal a variety of original and often surprising perspectives on the