ÊYou will never know, my dear and latest friend, the pleasure your visit has given us. It was such a new experience, and all the more to be appreciated, because we were firmly convinced we had come to the end of new experiences. For almost a quarter of a century, in our dear Turkey, we longed above all for something new; we would have welcomed death even as a change, but everything, everything was always the same. And now, in the space of eight short months, what have we not seen and done! Every day has brought some new impressions, new faces, new joys, new difficulties, new disappointments, new surprises and new friends; it seemed to both of us that we must have drunk the cup of novelty to its very dregs. On Sunday, after you had left us, we talked for a long time of you and the many subjects we had discussed together. Sympathy and interest so rarely go hand in handÑinterest engenders curiosity, sympathy produces many chords in the key of affection, but the sympathetic interest you felt for us has given birth on our side to a sincere friendship, which I know will stand the test of time. We felt a few minutes after you had been with us, how great was your comprehension, not only of our actions, but of all the private reasons, alas! so tragic, which made them necessary. You understood so much without our having to speak, and you guessed a great deal of what could not be put into words. That is what a Turkish woman appreciates more than anything else. We, who are not even credited with the possession of a soul, yet guard our souls as our most priceless treasures. Those who try to force our confidence in any way, we never forgive. Between friend and friend the highest form of sympathy is silence. For hours we Turkish women sit and commune with one another without speaking. You would, I know, understand this beautiful side of our life. Since our departure from our own country, and during these few months we have been in France, from all sides we have received kindness. We were ready to face yet once more unjust criticism, blame, scandal even; but instead, ever since we left Belgrade till we arrived here, everything has been quite the opposite. All the European papers have judged us impartially, some have even defended and praised us, but not one censured us for doing with our lives what it pleased us. But in Turkey what a difference! No Constantinople paper spoke of our flight. They were clever enough to know that by giving vent to any ill-feeling, saying what they really thought of our ÒdisgracefulÓ conduct, they would draw still more attention to the womenÕs cause; so we were left by the Press of our country severely alone. The Sultan Hamid, who interested himself a little too much in our welfare, became very anxious about us. Having left no stone unturned to force us to return (he had us arrested in the middle of the night on our arrival at Belgrade on the plea that my sister was a minor, and that both of us had been tricked away by an elderly lady for illicit purposes) he next ordered that all those European papers in which we were mentioned should be sent to him. As our flight drew forth bitter criticism of his autocratic government, he must, had he really taken the trouble to read about us, have found some very uncomfortable truths about himself. But that was no new rŽgime. For years he has fed himself on these indigestible viands, and his mechanism is used to them by now. 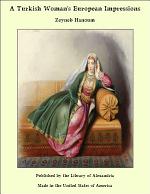 Authors: Zeyneb Hanoum
Categories:
ÊYou will never know, my dear and latest friend, the pleasure your visit has given us. It was such a new experience, and all the more to be appreciated, because we were firmly convinced we had come to the end of new experiences. For almost a quarter of a century,
Language: en
Pages:

A Turkish Woman's European Impressions ... Edited & with an Introduction by Grace Ellison. With 23 Illustrations from Photographs & a Drawing by Auguste Rodin

Authors: Zeyneb Hanoum
Categories:
Excerpt from A Turkish Woman's European Impressions What is true in my story is the culture allowed to Turkish women and the suffering which must necessarily follow. This suffering, which to my foreign eyes appeared perhaps more intense, is also giving anxiety to my dear friends the Turks themselves, and

Authors: Zeyneb Hanoum
Categories: History
"Fleeing Istanbul in 1906 for fear of imperial reprisals, the [Hanoum] sisters traveled in disguise to Europe, hoping to find 'freedom' in the West. Zeyneb Hanoum's correspondence with the English feminist Grace Ellison ... provides an account of both of their restricted lives in Istanbul and of their disappointment with